It would seem, in some respects, that a little more caution is entering the recruitment world. Upon saying that it is still a buoyant market place.

In the latest survey released by the REC and Markit they asked Tom Hadley, REC director of Policy for his thoughts.

“Over the last quarter permanent hiring has continued to grow, but the rate eased in March to the slowest since September 2015. While we expect jobs growth to continue overall, we are now seeing the effects of current uncertainty in the marketplace on UK employment.

“Global economic headwinds plus uncertainty around a possible Brexit make it likely that slower growth in permanent hiring will remain lower over the next few months as employers take a wait and see approach.

“In contrast, temporary hiring is on the up as businesses seek to meet increasing demand while retaining the ability to react quickly to any threats that might be around the corner.

“We have also seen a continuing increase in both stating salaries for permanent positions and hourly rates for temporary employment – a trend likely linked to the introduction of the National Living Wage”. 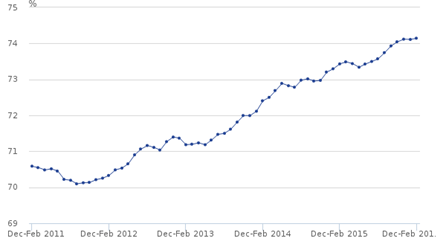 *Figures and graph from the Office of National Statistics website.

The number of people placed in permanent jobs increased further in during March. That said, the rate of expansion eased to a six-month low. A number of panellists reported that tight candidate availability had restricted growth of permanent staff appointments.

All four monitored English regions saw higher levels of permanent placements. The strongest growth was signalled in the North, while the slowest rate was reported in London.

Demand rose for all nine types of permanent staff in March. The strongest rate of growth was indicated for Executive/Professional workers. The slowest increase was reported for Hotel & Catering employees

Agencies billings from the employment of temporary/contract staff continued to rise in March. The rate of expansion quickened to a four-month high and was marked overall. Rising client activity levels were commonly reported by panellists noting an increase in temp billings.

Growth of temp billings was broad-based across the English regions, with the Midlands posting the sharpest increase.

Broad-based growth of demand for staff was reported in March. The strongest increase was signalled for Nursing/Medical/Care Workers, while the weakest growth was indicated for Engineering employees.

The chart above shows Changes in the number of jobs in the UK between December 2014 and December 2015, seasonally adjusted.

*Figures and graph from the Office of National Statistics website.

Here at Kingston Recruitment, we continue to go from strength to strength with the launch of our new Website expected next month!! Plus we have joined the modern age and now have a twitter account – KingstonRecLtd – please feel free to follow us for latest news, jobs and trends!!