“This month’s report contains further evidence that UK employers have shrugged off the initial shock of the referendum result. Overall permanent hiring is in growth for the second consecutive month. Even more encouraging is the growth in vacancies; consumer confidence and strong demand on businesses has ensured that hirers are creating new jobs.

“There remains a degree of caution in London, where permanent hiring has been on pause for the last five months. This is likely to be because of uncertainty around the longer-term impact of the referendum result within the financial sector in particular

“There are indicators that the gap between pay growth and inflation is narrowing, which could present a threat to sustainable economic growth. We hope the government will address this issue in the Autumn Statement with fiscal stimulus. This should help to settle the nerves so that employers feel confident enough to keep hiring.

“We also urge the government to be mindful of talent shortages faced by many UK employers. Despite some of the rhetoric at this week’s Conservative Party conference, we will continue to need workers from overseas in a range of sectors, from engineering to health care. The business community must have a role in developing an immigration model that strikes the right balance.” 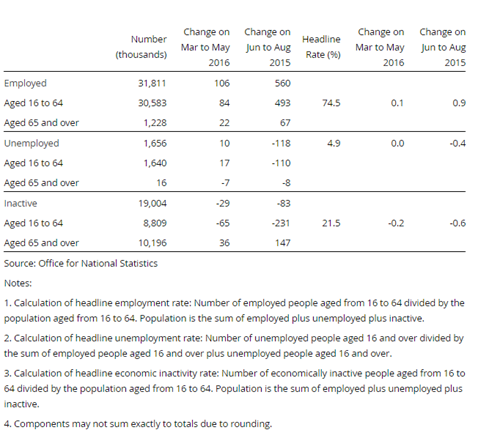 The table above shows Summary of UK labour market statistics for June to August 2016, seasonally adjusted

The number of people placed in permanent jobs rose again in September, having returned to growth in August. That said, the rate of expansion remained marginal overall. Panellists commented on rising client demand for staff, although skill shortages continued to be reported as a factor putting a brake on growth.

Permanent placements rose fastest in the Midlands during September. However, London, saw a further reduction in volumes.

Engineering was top of the demand for staff “league table” in September, ahead of Nursing/Medical/Care and IT & Computing.  At the bottom of the table was Construction, where only a marginal increase was recorded.

Agencies’ billings from the employment of temporary/contract staff rose further in September. However, the rate of expansion moderated from Augusts three month high.

Growth of short term staff billings was broad based across the monitored English regions in the latest survey period, but Scotland saw a slight fall.

Hotel & Catering was the most sought after category, with Engineering in second place. As with permanent staff, Construction posted the slowest rise.